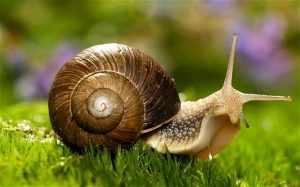 Spring is here and that means more folks are getting out into the yard, planting and sprucing up green spaces. Many people put out snail bait protect their gardens from those unwanted pests…and that means you as the dog owner must be aware and supervise your pets in order to keep them safe! Metaldehyde is an ingredient found in slug and snail baits as well as solid fuel for camp stoves. It is poisonous to dogs and affects the nervous system. This type of poisoning is often seen in coastal and low-lying areas, where use of slug and snail bait is customary. Even though metaldehyde poisoning can be seen in both dogs and cats, it is more common in dogs because the sweet brown sugar that is added to attract snails and slugs also attracts dogs.

For us in the veterinary community it means obtaining history – onset of symptoms, getting blood work including chemistry and complete blood count, and urinalysis. This is an emergency and hospitalization including inducing for vomiting; supportive intravenous fluid therapy is necessary. If the pet ingested the snail bait over an hour ago gastric lavage (pump stomach) is indicated to eliminate metaldehyde from the body. There is no antidote for metaldehyde! If the dog is convulsing, anesthesia is advised with gastric lavage and once the poison is removed, activated charcoal administered by stomach tube to absorb the rest of poison in the stomach and intestines. The dog needs to be restrained to prevent injury and monitored closely.

Overall prognosis ultimately depends on the amount of metaldehyde ingested, time to treatment, and quality of care provided. If left untreated a dog may die within few hours of ingestion…so be careful out there – keep your pet safe!

Call Us Text Us
Accessibility by WAH