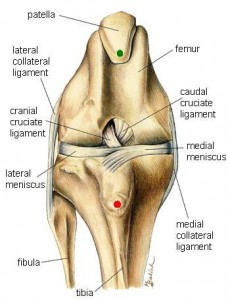 There are two ligaments inside the knee that cross – hence the name cruciate ligament. These ligaments provide knee stability for your pet while walking, running, playing ball, etc. If the anterior cruciate tears (the front most ligament and most commonly injured), the shinbone moves forward as the dog walks causing pain and damage to the cartilage in the knee. Torn ligaments in the knee occur in animals just as they do in humans. Rupture of the cruciate ligament may be caused in a healthy joint by a traumatic incident, or it may be the result of gradual weakening of the ligament due to predisposing factors such as being overweight, pre-existing inflammation, and predisposing genetic factors. A torn cruciate ligament results in muscle atrophy, joint scar tissue, arthritis, and reduced joint range of motion. Physical rehabilitation helps to reverse these changes and return the leg back to pre-injury function.

Cruciate ligament ruptures are diagnosed based upon history, symptoms and palpation of the joint with the patient under sedation. When the patient is sedated, the muscles relax and the veterinarian can move the tibia back and forth under the femur. If the knee moves, it is a positive drawer motion and that means that the cruciate ligament is torn or ruptured. Following this palpation, as part of the evaluation for TPLO or Tibial Tuberosity Advancement (TTA) surgery, the knees are x-rayed as well.

The TPLO neutralizes tibia motion by turning tibial thrust into tibial compression. During surgery, a cut is made in the tibia and the bone is then rotated. This produces a more level plateau that no longer allows thrust to occur. Since the tibial plateau angle varies between dogs, multiple x-rays of the knee are taken before surgery to determine the individual angle. After the cut is made in the bone and the plateau angle is leveled, a special bone plate is applied with screws to allow healing. 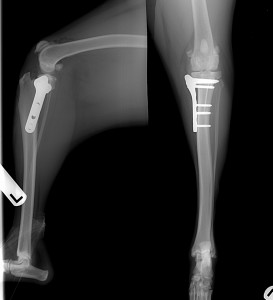 The TPLO technique allows for large dogs to have a 90% chance for returning to pre-injury function without arthritic development. If there is no ACL present, the thighbone or femur slips off the back of the shinbone forcing it forward as the dog walks (called cranial tibial thrust). TPLO surgery eliminates cranial tibial thrust by changing the angle of the top of the tibia (called the plateau). This prevents the femur from riding off the back of the tibia and forcing it forward.

With TPLO surgery, the pet has a quick recovery and usually becomes weight bearing within 2-weeks. The pet’s leg is bandaged and usually goes home after a two-night hospital stay. The healing process is approximately 8-weeks with strict rest and leash-only walks advised during this period.

At Mohnacky Animal Hospital we re-evaluate the patient at 14-days, 4-weeks, 8-weeks, and 6 months postoperatively. During the 8-week and 6-month postoperative progress exam, the patient receives a full physical examination and the affected knee radiographed.

TPLO is not the only treatment option available. This injury may be repaired with a “tight rope” surgery or a variety of extra capsular fixations; however, sometimes medium to large dogs may develop arthritis post operatively and more orthopedic problems develop (i.e., patella luxation and meniscus injury). Other options to help ACL ruptures include: medical therapy and other surgical options. The best treatment for the patient depends on many factors. These treatment option(s) are discussed after a history is taken, radiographs evaluated, and completion of an orthopedic examination.

The TTA is another surgery that eliminates tibial thrust due to a torn or ruptured cruciate ligament. The TTA works by advancing part of the tibia to a 90-degree angle with the tibial plateau. This allows the muscles to keep the knee balanced and stable even with a ruptured ligament. To accomplish this, a cut is made in the tibia and the bone is then advanced. After the cut is made in the bone and the bone advanced, a special bone plate and spacer are applied with screws to allow healing.

The TTA also has a success rate of 90% –increase in muscle mass, improved knee range of motion, and improved activity levels are observed in patients. Many dogs return to the same level of activity and knee function they had before injury. Others may have some limitations with more intense activities or have intermittent knee stiffness. Regardless, an improved quality of life, greater comfort, and much improved knee function are expected in every patient following a TTA or TPLO.

When the patient is discharged some basic rehabilitation exercises are demonstrated to the client, and 14-day, 4-week and 8-week post-operative re-evaluation is required. At the 4-week recheck, the dog will be evaluated physically and the affected knee will be x-rayed to determine bone healing. The 8-week recheck is to ensure proper recovery is progressing appropriately.

TTA and TPLO are not the only treatment option available for the pet. Which treatment is best for the pet depends on many factors. These treatment option(s) are discussed after a history is taken, radiographs evaluated, and completion of an orthopedic examination.

Should the pet have a TTA or a TPLO?

Factors that are considered when deciding on which surgery may be best for the dog include the patient’s preoperative tibial plateau angle, tibia shape/size, patient size and age, degree of ligament rupture, and whether any other orthopedic abnormalities are present. Which surgery is considered best is discussed in detail during the initial consultation.

Prior to surgery the pet needs a complete medical history, physical examination, and discussion of the procedure. Preoperative blood work is also performed to check major organ functions. The routine length of hospitalization for postoperative TTA (or TPLO) patients is overnight and up to 3-days following surgery. Usually, the pet will go home with the leg bandaged.

The best way to prevent a cruciate ligament tear or rupture is to control the pet’s body weight. It is well established that overweight dogs have a higher risk of cruciate injury. Weight loss is recommended and beneficial for both the operated and un-operated leg. Long-term activity restriction is unrealistic and not successful in preventing additional injury since most dogs rupture their cruciate performing normal activities.

Call Us Text Us
Accessibility by WAH